I am a contractor at the Caltech/Jet Propulsion Laboratory, a NASA center in Pasadena, CA. JPL is one of the facilities that builds and operates spacecrafts for NASA.You might think that my favorite thing here is the robots (which are pretty awesome), but really my favorite thing on lab is this piece of art:

This was made by Dan Goods, an artist who also works at JPL doing various art-related projects. The lights represent data being sent back and forth from Earth through NASA’s Deep Space Network (DSN), and the patterns are related to the data rate and communication frequency of the individual spacecraft it is talking to. And all of this reflects what’s happening in real time. I need to get a longer video so you can see more than one data transfer, but hopefully you get the idea.

The DSN is made up of large radio antennas that we use to communicate with spacecrafts throughout the solar system. These radio telescopes can both send instructions to our robots, and collect the data they send back to Earth. NASA has three DSN facilities, one in Madrid (Spain), Canberra (Australia), and Goldstone, CA (US). These are positioned around the world so that we can communicate with a spacecraft no matter what direction it’s in, and we’re the only ones that have this capability. We do a lot of monitoring for other space agencies as well, because while some countries do have their own antennas, no one has the spatial coverage that NASA does.

Recently I had the opportunity to visit the facility in Goldstone, which is managed by JPL. They don’t give public tours of Goldstone right now. It is nested inside of a military base, from which NASA leases the land, so arranging a visit takes a little doing. But my JPL badge gives me permission to access to the facility, and we did some additional security screening to get my husband through the gate. It was definitely worth the trip. The facility is in the Mojave desert, and the land it’s on is open and mostly wild. We had drive several miles between stops on the tour. Our first stop was a nice view of an older, decommissioned radio antenna, and a painted hillside.

We learned a lot about the history of the facility. There are a bunch of antennas in different valleys that they built for different missions back in the 60s and 70s. Eventually they stopped building new ones every time there was a new mission, and now all missions share time on the existing DSN. We also learned about the Goldstone Apple Valley Radio Telescope, an older antenna that was turned over to a local school system to operate. GAVRT is fully operated by k-12 teachers and students doing real science- any teacher can sign up to get involved! Here’s a few shots of some of the smaller 34 m antennas like GAVRT. 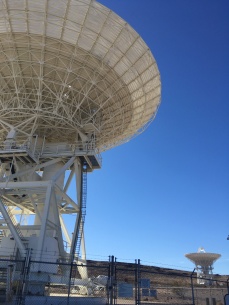 The original antenna built at this facility is 70 m wide, and boy is it impressive to stand next to! This antenna is 50 years old! They used it to communicate with the Apollo astronauts, and with both Voyager spacecrafts. At that time, there was no internet, so they recorded the data on magnetic tape and had to physically drive it to JPL to be analyzed. Audio recordings of the Apollo astronauts could be played over the phone to the space center in Houston. And this antenna is still operational today!They’ve done a lot of maintenance over the years, and we were told NASA never intends to build one this big again. All the newer antennas are smaller. It takes four 34 m antennas to get the same signal to noise as the one 70 m, but at a fraction of the cost in building and maintenance. 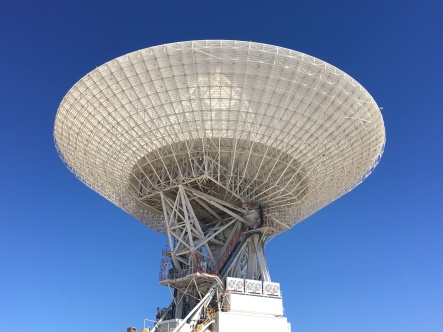 All the antennas were in “stow” position the day we visited, as they were doing software upgrades. (Some of you nerds out there will be happy to know that they run on Ubuntu.) We did get to see the 70 m dish rotate, but it was so sloooow I didn’t embed the video because it’s actually really boring to watch. All in all, it was a super interesting trip. Without the DSN, we couldn’t operate or track spacecrafts- and yet, I knew barely anything about it. So it was a really interesting trip that I feel like helped to educate myself about my own field. Definitely would go back- or maybe I’ll set my sights on Madrid and Canberra instead.

Getting back to the art though, I think I love Dan Goods’ piece so much both because it is aesthetically beautiful and because it let’s you experience exploration in real time. It takes DSN data from space robots and turns it into something we can experience with our base sense of sight. It makes me feel closer to and more involved with the spacecrafts on which I rely to do my research, even though they are astronomical units away from me. It makes me feel more a part of the exploration that we do as scientists, and not just the analysis. Anyone can view what spacecraft the DSN is talking to in real time at DSN Now (https://eyes.nasa.gov/dsn/dsn.html). I know data isn’t as inspiring to everyone as it is to me, but it’s definitely worth checking it out!