This was a craft I did to add some flare to a recent segment of my D&D campaign. The adventure followed the party on a quest to defeat a demon, but in the process they became involved in a regional political conflict between humans and a persecuted werewolf race called the Wolvega. The party had to gather the seeds of their sacred Moon trees to help save the Wolfwood and Wolvega village, in the process solving the mystery of a cursed chalice and befriending some NPCs with tragic pasts. The story involves a decades old war, an order of necromancer clerics, Moon magic, and ancient spells from the First Bard’s Book of Silent Songs which they recovered in an earlier part of the game. There’s a complete description and session outlines here if you’re interested in reading more or playing the adventure with your own group.

I often get ideas for D&D from random things I find or see that inspire me to craft. In this case, I got the idea for the Moon Trees from a tree in a local park whose roots show in a wide circle in the dirt. It reminded me of celtic knots woven around the trees trunk. I’d also recently found a couple of cool looking seedpods that I thought it would be neat to use in the game somehow. But how…..

In the story, the Wolvega lore goes that the moon’s magic is beamed down upon the planet along with the moonlight, which is then taken up by the Moon Trees and spread out throughout the forest through their roots. It is said that on rare occasions (such as eclipses, when no moonlight is present), the trees are unable to pull the magic from the air and it hangs in the woods like a mist. This is usually a brief occurrence, but if it happened for an extended period the forest would become drained of magic and die. Presently, a demon has overtaken one of the trees and plunged the Wolfwood into perpetual night, upsetting its natural ecological order. A magic mist drapes the forest, and the Moon Trees are slowly dying. The only way to save it is to gather a seed from each of the sacred trees and replant them. The seeds themselves are also devoid of magic, and so the party must perform an ancient spell that distills the moonlight from air into a liquid form. When they dip the seeds into the hot, roiling, glowing liquid, it imbues them once more with magic and they can be replanted to save the Wolfwood.

I really wanted to do something dramatic with the seed pods I’d found, since by themselves they are a pretty simple prop. Each time they recovered a moon seed in the game, I gave them one of the physical seed pods. They are painted black, so the players didn’t expect anything special, BUT—– the twist was that I used thermochromic paint! It comes in different color combos and has different activation temperatures. They’re pricier than regular paint (unsurprising, of course), so I only chose one color (for now…). It’s black and turns bright yelling when heated above 80 degrees F. JUST LOOK HOW FRIGGIN’ AWESOME THIS STUFF IS. 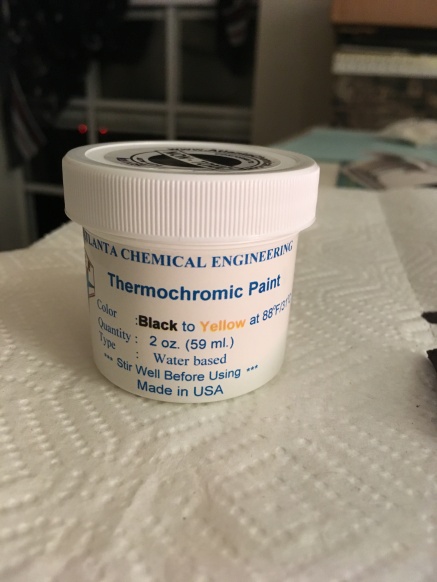 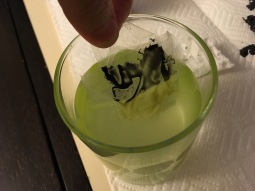 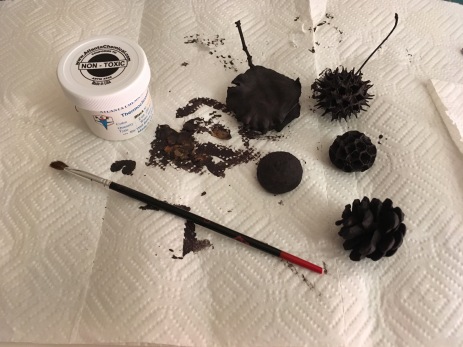 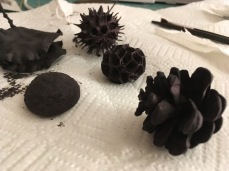 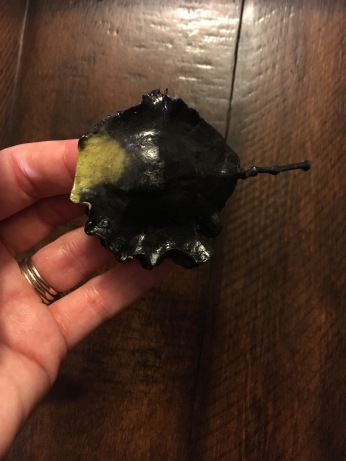 When the players finally performed the spell after several real-world months of this story arc, I couldn’t wait to reveal the secret. I gave them a wooden bowl and poured boiling water into it to represent the distilled moon magic. It was obvious from the session narrative that they were to place the seeds in the water, but none of them were expecting the color change. It was AWESOME! Hard to convey the mood in the room without you being there, but everyone was surprised and delighted, and it made for a really fantastic end to a long story arc in the campaign. Here are some action shots from the game! 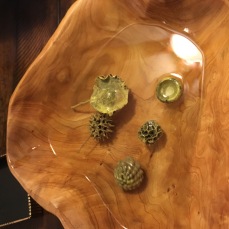 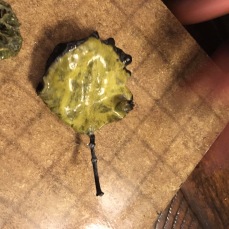